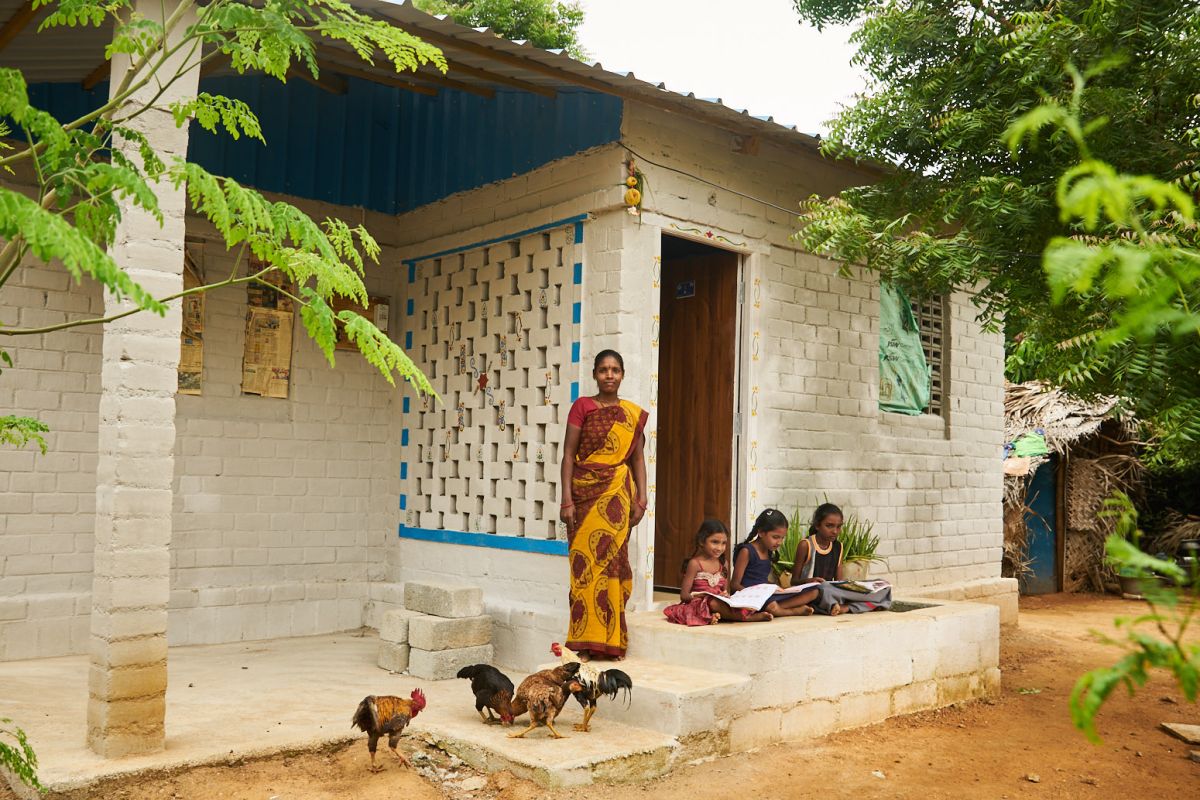 The Banyan has maintained a partnership with the HCL Foundation for the past 6 years. Due to their support,  The Banyan has been able to initiate and maintain innovative projects across both urban and rural sites in Tamil Nadu.

The building where our Shelter for Men with Psychosocial Needs operates,  was originally a primary school that was converted into 2010 into a night shelter for homeless persons with mental health issues by the Corporation of Chennai; against much resistance from the community.

In 2012, The Banyan took over the executive responsibilities of the shelter. With financial support from The HCL Foundation,  we decided to challenge traditional notions of institutional spaces. It was an exciting opportunity to build a truly open model of community mental health care in an urban setting. This was however, not an easy task. Through individual and group sessions, we were able to create a non-threatening environment for these concerns to be shared, and for residents to step out into the community on their own terms.

We simultaneously organised outreach and awareness programmes for the Dooming Kuppam community on a range of topics such as alcoholism, healthy lifestyles, domestic violence etc. We saw a slow but steady rise in community participation and rapport building with staff and residents through these programmes and informal conversations at the shelter. Within a year, many residents were able to visit the community on their own without facing any kind of discrimination, and community members began to take ownership and responsibility of the shelter and its residents as one of their own.

One of the most touching breakthroughs of this engagement has been the children’s involvement in the lives of the residents, and their decision to celebrate important functions such as birthdays, Diwali and Christmas with their new, extended family. When misconceptions began to reduce and barriers began to break, other homeless persons in need of food and shelter also started accessing our services.

In the past six years, this programme has been able to reach out to over 1000 homeless persons through residential and outpatient services. We have also reached out to the Santhome community through outreach in the form of  soup kitchens, street engagement, daycare and vocational training activities. This past year,  24 psycho education, awareness programmes and workshops were conducted for parents of children attending Gurukul. In addition, extra curricular activities and workshops were also available for children to attend (e.g. photography, film making, computer coaching etc.) As a result, there has been an increase of 40% in enrolments for Gurukul this past year.

Kovalam is a rural panchayat in Thiruporur taluk, Kanchipuram district. A coastal settlement, the main occupation here is fishing. The total population is just below 7,000, an estimated 38% of whom live below the poverty line. Melaiyur has a population of about 2,800 with a 100% of their population living in poverty. The largest problems cited by their community is accessibility to health services, livelihoods and education. Most of the children in these communities are first generation learners and parents cannot afford to send them to school for more than a few years.

In order to uplift the communities in the organisations catchment areas as well as break stigma perpetuated by mental illness, we initiated the Gurukuls, supported by The HCL foundation, and co-located in centres catering to persons with severe and common mental health issues.

The project in Thiruporur commenced with the summer workshops covering 5 panchayats on ‘Safety and confidence building’. The module was developed in collaboration with the psychology faculty at the Banyan Academy of Leadership in Mental Health (BALM), Gurukul teachers and community based workers. The learning centres target at risk children from marginalised communities and focuses on after school academic support and extracurricular activities. This year we also engaged parents, bringing them in for regular meeting to understand their children and the challenges they face, better. This year, 14 awareness programmes were conducted across various schools in the block. Topics such as understanding identity and recognising child sexual abuse were covered for over 1,300 children.

363 children participated from across these panchayats and an important additional outcome was the development of 2 new centres in Pattipulam and Kizhur.

In the last year, 53 students enrolled in Kovalam, 70 in Kizhur and 119 in Pattipulam. During this year’s annual day festival – hundreds of children and their parents attended,  bringing together individuals from a variety of different communities, in the spirit of inclusion.

Reaching out to Tribal Communities; Building Foundations of Support

In the coming year we would like to expand the center to another remote location so as to provide support for even more children with poor access. Besides engaging in education support we would also like promote health, hygiene and nutrition in Kottamedu village where we are working with the Irullar and scheduled caste communities to provide housing support for communities affected by the 2015 floods. The children of this community suffer from frequent bouts of ill health brought on by poor nutrition and hygiene habits. As the settlement has migrated here, they have had to change their diet and are yet to find a balance. This is further compounded by issues of poverty and poor access to health care.

In fact, The Thiruporur block is home to roughly 5000 Irullar families who have migrated from the Nilgiris District. They have selected agricultural holdings nearby, and their work mostly consists of sowing seeds, aiding with harvest, trapping rats and snakes, cutting down trees. They face a large number of socio‐cultural problems due to their relatively recent entrance into the community – including bonded labour, low literacy levels, discrimination in welfare entitlements, alcoholism, etc. Although the Irullar communities have lived in the Thiruporur Block for at least 50 years now, many ﬁnd it very difficult to acquire land deeds, which is further complicated by the fact that many occupy forest land.

Many of these individuals live in roughly constructed homes, that they have constructed themselves over several years with the material they could afford. The 2015 rains were devastating to this community and their homes. The rains collapsed their mud walls, thatched roofs and ﬂooded their homes. The community has since shown their resilience and attempted to repair their homes, to the best of their ability, with sandbags and tarpaulin. However, they continue to live in fear and dread of another similar monsoon.

The Banyan carried out a housing intervention, in collaboration with a Karnataka based NGO (with a background in rural and budget housing), Nivasa and The HCL Foundation, to provide more sustainable homes for this marginalised community.  The project has taken an asset-based approach that utilises resources (both materials & skills) from the local community. The Irullar community has be involved in this project since its inception: choosing house design, providing their input on choice of location, describing the requirements etc. The community is also involved in making the bricks that are used to create the homes,  in the construction process and are encouraged to purchase items and materials that are within their means.

“Living in a pakka house was our unimaginable dream, Thanks to HCL and The Banyan helped us to think that nothing is impossible” – Mr. Muththan, a houseowner from the community.

6  new homes have been completed in the community of Kottamedu Irullar Paguthy. Not only has this community benefited from acquiring new sturdy and secure homes that can survive severe rainfall, but they have also gained vocational skills in making bricks and construction that could allow for further employment in similar areas in the future.

The Banyan and HCL Foundation’s partnership has been one of mutual learning, cemented by a sense of urgency to respond to the needs of the most marginalised. HCL Foundation’s staff and volunteers have become an integral part of The Banyan family, and we hope it stays that way for many more years to come!